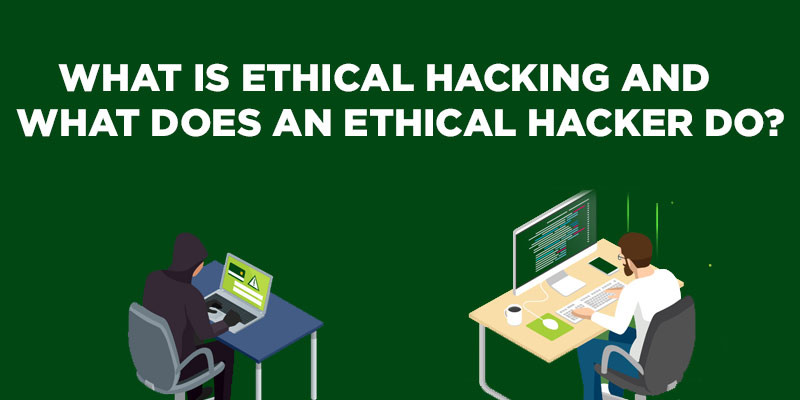 Ethical hacking is one of the most demanding IT careers because companies are apprehensive about storing and protecting confidential data from cyber attacks. Due to this, the demand for ethical hackers increases in IT and NON- IT sectors like finance, government agencies, etc.

How to be an ethical hacker and how is hacking done

Ethical hackers are also referred to as white hat hackers. White hats are professionals who breach the system, network, resources or security to gather data, but they have authority. Many top companies hire ethical hackers to find the potential weakness that malevolent hackers could exploit.

The primary purpose of ethical hacking and cyber security is to determine the security issue and vulnerabilities in the intended system, infrastructure and system. In this process, the hackers find the possible vulnerabilities and determine whether unauthorized access or other malicious activities are possible.

Ethical hacking is the process of technical hacking in which hackers are in the infosec to find the malicious attack that threatens business and operational data.

Ethical hackers uncover the security issue in the system configuration and find known and unknown hardware or software vulnerabilities, the operational shortcomings of the process or the technical defences.

Distributed denial-of-service attacks represent a potential security risk from malicious hacking because multiple compromised computers are used to attack a single target, which could be any resource on the computing network.

The organization permits an ethical hacker to discern vulnerabilities and provide the authority to penetrate its computing infrastructure. Many methods and techniques used by black hat hackers and ethical hackers are similar while testing IT security. On the other hand, ethical hackers collect threat intellect to assist organizations in improving network security by implementing more robust infosec policies, procedures, and technologies.

Any business that operates an online service or has a network connected to the internet should think about having ethical hackers who can perform penetration testing (pen testing) on its operating environment.

What do ethical hackers do, and how is hacking done?

Ethical hackers can aid organizations in several ways, including the following:

These demonstrations expose executives to the hacking techniques that bad actors might use to compromise their systems and cause havoc for their businesses. Businesses that are knowledgeable about the strategies attackers use to access their systems are better able to thwart intrusions.

As hacking techniques and methodologies keep innovating, cyber attack taking the route to breach the system is more effective than before.

Moreover, it damages and destroys the business, especially the small ones with no strong network or system configuration. It indicates that most of the companies were unaware of the security breaches.

So, ethical hackers update themselves according to the organization's needs and understand how threat actors operate. Further, they have understood how illegal hackers obtain new information and techniques to attack systems. Working with ethical hackers allows security professionals to respond better to the constantly evolving nature of digital threats, enabling them to better prepare for upcoming attacks.

Pen testers and ethical hackers are interchangeable terms used to indicate that both do the same process in finding the weaknesses in the network or system. But some of the methods or techniques they utilize differ from their role. Many companies hire ethical hackers and pen testers to strengthen the IT infrastructure or security.

The main objective of the ethical hacker is to test the IT system and to determine the security flaw, ransomware or emerging computer viruses.

Pen tests are frequently a part of their work, but they manage overall IT security assessment. The pen tester method and techniques slightly resemble the ethical hacker, but they often follow a set schedule when doing their jobs. Pen testing also has a narrower focus on particular network components as opposed to ongoing general security.

For example, the person conducting the pen test might only have temporary access to the tested systems.

As ethical hackers, malicious hackers utilize the same techniques and methodology for breaching the system or network. But the only difference is ethical hackers will have authority.

They simulate scenarios that could endanger business and operational data using a form of reverse engineering. The various methods and resources are a part of a comprehensive vulnerability analysis that an ethical hacker conducts for a client.

Some of these hacking techniques include the following:

Before updating a new software into your system, analyze whether it is vulnerabilities-free software.

It is necessary to analyze the traffic, so perform network traffic analysis and sniffing by employing appropriate tools.

Techniques for testing for Structured Query

Social engineering strategies are another tool used by ethical hackers to trick users and learn more about a company's computing environment.

Ethical hackers, like black hat hackers, browse through social media or GitHub postings, trick employees into responding to phishing emails or texts, or creep around buildings with a clipboard to target weak points in physical security. However, some social engineering techniques, like physically threatening workers or trying to steal access or information, should not be used by ethical hackers.

To become a professional hacker, you can join Ethical Hacking Course In Bangalore, which is a meticulously designed course for the Bangalore-based students who intend to begin their career in the hacking field with placement support.

How to become an ethical hacker

Since there is no set educational standard for ethical hackers, each organisation may set its own standards. An information security, computer science, or even mathematics bachelor's or master's degree is a good starting point for those interested in a career as an ethical hacker.

Those who do not intend to attend college might consider joining the military and pursuing an infosec career. When hiring for infosec roles, many companies view a military background as advantageous, and some require security knowledge.

Studying other technical topics like programming, scripting, networking, and hardware engineering will help you gain a fundamental understanding of the underlying technologies that make the systems ethical hackers more knowledgeable. Additional technical skills required include system administration and software development.

These are a few certification paths for ethical hackers. So, based on experience, the certification level will increase accordingly.

If you want to become a cybersecurity specialist, you can Cyber Security Course in Bangalore, which will help you better understand hacking, cryptography, computer networks & security, application security, etc.

The above are a few types of hackers, and based on their roles, the hacking mythology and techniques differ.

How to Become A Successful Java Developer?

Why Learn Python? 8 Reasons Why it's So Hot Right Now